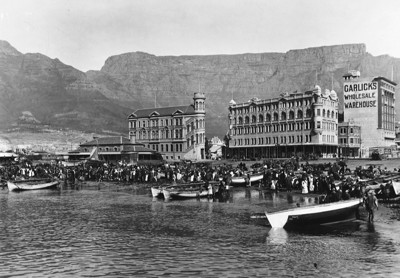 Rearrival was composed as part of a Fordham University concert series in conjunction with their Poets Out Loud poetry prizes. Four C4 composers wrote new pieces responding to the poetry of the year's two prizewinners. I chose Henk Rossouw's volume Xamissa.

Rearrival, the first poem in Xamissa, sets the tone for the book with an extended description of Cape Town. The poet, returning home after a seven year absence, stands with his brother in a foothill suburb, watching the city and its inhabitants as the sun slowly goes down. After the end of apartheid, some things have changed, but some things remain the same, and the city is still enmeshed in its complicated and multilayered history.

When I first read through Xamissa, I was taken with Rossouw's style, literary and restrained, yet unflinching in taking on the injustices of the past and present. Rearrival in particular seemed to strike a good balance as a musical text. It is long enough to give rein to the poet's wide-ranging introspection, yet short enough that I could set most of it. And I thought it would push me out of my comfort zone as a composer without pushing me into inauthenticity, a concern for someone like me who has no direct experience of South Africa. Hopefully I have managed to find the right middle ground.