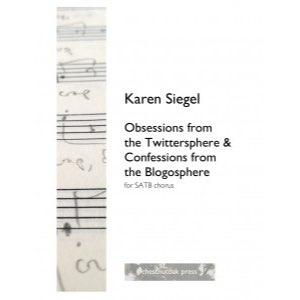 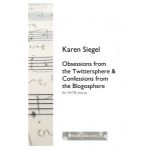 This humorous pair of works pokes fun at the online musings of Twitter users and bloggers. The quotes overlap and compete for attention, and are often fragmented to create rhythmic textures. Confessions from the Blogosphere was composed for and premiered by C4: the Choral Composer/Conductor Collective in 2006, and can be performed on its own or with the companion piece Obsessions from the Twittersphere, composed for and premiered by C4 in 2009. Confessions from the Blogosphere was awarded first prize in the 2013 New York Virtuoso Singers Choral Composition Competition, and was a winner of the 2007 Manhattan Choral Ensemble Commissioning Competition.