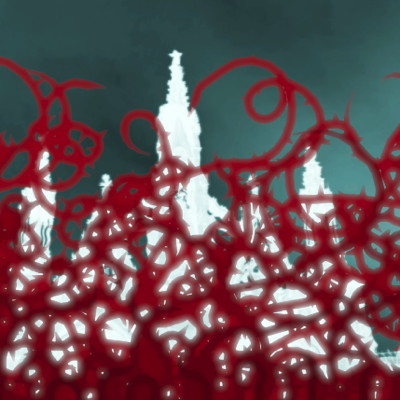 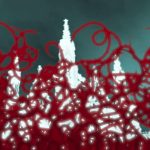 Austrian poet Georg Trakl (1887 - 1914) lived a short, unhappy life which ended in a cocaine overdose brought on by the horrors of his experience as a medical officer in World War I. In common with many poets of that time, Trakl’s work often features somber visions of a world in decline. Thorns in particular are a recurring image. In the words of Richard Millington, “The powerful final image of the poem..., in which the speaker and the ‘brother’ he is addressing are cast together as ‘blind clock hands’ climbing towards midnight, is illustrative of Trakl’s tendency to portray human solidarity as a source of meaning and solace in a disintegrating world.”

To capture the feeling of the clock ticking steadily amidst the disintegration, I used a glockenspiel playing two notes in alternation through most of the piece, with whisperers placed on the sides of the audience repeating snippets of the poem and making wind sounds. In the premiere, we also used live electronics to track the pitches of four singers outfitted with wireless microphones and generate atmospheric effects.

The performance was accompanied by a series of prerecorded video segments triggered from the sound booth to maintain synchronization with the conductor and chorus. The video was created using iMovie, Apple Motion, and custom thorn tracery animations written using the Processing environment, superimposed on video recorded with permission at Green-Wood Cemetery, Brooklyn, NY. The video also doubles as English supertitles. Video available on request for use in performance.